This initiative of the Women in Science (WiS) Panel relates to mentoring of young women who are potentially looking for careers in science, engineering, medicine etc.

WiS has compiled a collection of essays on the lives of Indian women scientists in the form a book titled 'Lilavati's Daughters: The Women Scientists of India'. The book contains brief biographical and autobiographical sketches of about one hundred women scientists from India. Covering a range of disciplines, in these essays the women scientists talk of what brought them to science, what kept their interest alive, and what has helped them achieve some measure of distinction in their careers.

The Panel of Women in Science hopes that this collection would represent our cultural diversity as well as cover a large range of disciplines so that any woman student could gain from the insights and experiences of women to whom they can relate at many levels.

The book 'Lilavati's Daughters: The Women Scientists of India' was successfully released during the Inaugural session of the Annual meeting of the Indian Academy of Sciences on 31st October, 2008, by Dr. D. Balasubramanian, President of IAS, at the Indian Institute of Technology, New Delhi. Check the book here:

Our inspiration for this drive was from the book "One Hundred Reasons to be a Scientist", a volume of essays put together by Prof. K R Sreenivasan, Director of the International Center for Theoretical Physics, Trieste.

"The Girl's Guide to a Life in Science" - Young Zubaan's latest publication results form an initiative of the "Women in Scinece Panel" of the Indian Academy of Sciences (IASc), Bangalore. It was released at the Annual Meeting of the IASc in Ahmedabad on Friday, 18 November 2011.

Eklavya Foundation, an NGO in Madhya Pradesh which develops and field tests innovative educational programmes and trains resource people to implement these programmes, has published a review of 'Lilavati's Daughters: The Women Scientists of India' and some of its essays in Hindi language in two of its publications 'Srote' and 'Sandarbh' respectively.
Review in 'Srote'.

Abridged translated versions of the essays of 'Lilavati's Daughters: The Women Scientists of India' that have appeared in the Marathi magazine Loksatta have been put up in our website. Have a look here...

Interesting reviews on 'Lilavati's Daughters: The Women Scientists of India'.

Tribute to women scientists - The Hindu 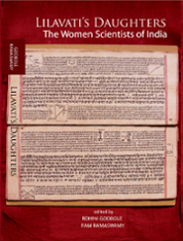 The Women Scientists of India

For Contents and Profiles of the contributors and their articles, click here

Details for ordering and procuring the book:

For more details on ordering and procuring the book, click here